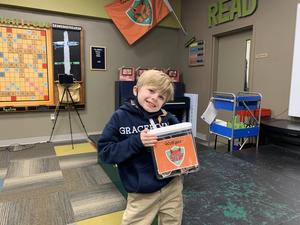 At the beginning of the school year, students at GRACEPOINT renewed their commitment to raise $28 per month for each of their four adopted students at Brighton Academy in Addis Ababa, Ethiopia.  The monthly contribution provides tuition, uniforms, materials, food, and clean water for a child attending the school. This giving opportunity is a HOUSE challenge and as of today, Aquiline has raised $378.

Brighton Academy grew out of the non-profit organization, Brighton Their World which was established in 2010. Brighton Their World officially began as a result of Tymm and Laura Hoffmann responding to a call God placed on their lives after their adopted son, Brighton, passed away in an orphanage in Ethiopia before they could bring him home. Tymm and Laura decided to impact the lives of orphans everywhere by forming this organization. Six years later, the program expanded and Brighton Academy opened their doors.

“We aim to truly be a bright light in Ethiopia and to bring a solid education to kids who might not have ever received it. We long for our kids, families and staff to feel the love of Jesus when they walk through the gate each morning.” - Tymm and Laura Hoffman